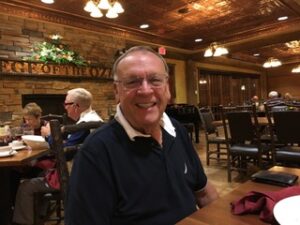 It is with great sadness that we report that David Eugene Herrington, former Public Member of the Computing Accreditation Commission of ABET, passed away on January 9, 2021. David will be fondly remembered by his moniker, “Social Guy!” (and the exclamation point was always there!) for arranging post-meeting dinners and get-togethers to help the ExCom and Commission bond after a hard day’s work.

David was born July 30, 1946, and graduated from the University of Arkansas with degrees in psychology, followed by an MBA. In junior high school David and Larry Jones, former ABET President and CSAB leader, first became friends and they maintained this friendship for the rest of David’s life.

David’s professional career started with a stint in the U.S. Army, followed by the position of European Coordinator for the University of Arkansas overseas graduate education program. David’s subsequent career as education coordinator for the Sheet Metal Workers’ National Training Fund made him a natural for the role of CAC Public Member, and David was duly elected after Larry’s nomination.

David is survived by his wife, Vicki, daughters Holly and Heidi, and their four grandchildren. David switched collegiate allegiances and the Herrington line all went to Virginia Tech.

David’s larger-than-life personality filled a room and made everyone who met him feel welcome and special. He will be greatly missed.

CSAB and computer science have lost a pioneer. Anne-Louise Radimsky was a long-time CSAB volunteer…

CSAB has lost one of its founders. Raymond "Ray" Miller was chair of the joint…